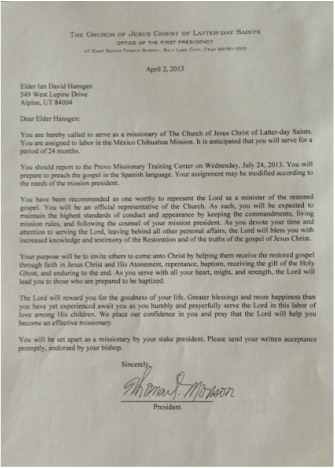 Elder Ian David Hansgen received his call to serve as a missionary for The Church of Jesus Christ of Latter-Day Saints in the Mexico, Chihuahua Mission on April 2, 2013.

He arrived at the Provo West MTC (BYU Student/Family Housing - Wyview Apartments) on July 24, 2013, where he was taught to preach the Gospel in the Spanish language.

He departed for his service in Chihuahua, Mexico on September 2, 2013.

As of December 23, 2013, he currently resides and serves in the city of Camargo, Mexico.

His chosen scripture theme reads:
"And Christ hath said:  If ye will have faith in me ye shall have power to do whatsoever thing is expedient in me."  Moroni Chapter 7, verse 33
Proudly powered by Weebly